We live outside the battlefield in Gettysburg, PA, and I go out and photograph the field quite a bit as you can imagine. While out on the field, I run into people and get to chatting with them. Sometimes they are photographers from other areas who are just here on vacation and are looking for the right spots to take photos. I get asked a lot about the best places on the field for photography. We'll get to that but first a brief history of the area. Check out our companion books to this series of posts here.

Gettysburg is at the juncture of ten major roads that go out like the spokes of a wheel; the road network made it attractive to settlers and travelers as well as the armies during the American Civil War. The town named after a prominent resident and tavern owner - Samuel Gettys, in 1786 with the borough incorporated in 1806. Learn more here.

On July 1 - 3, The Army of Northern Virginia under the command of Robert E Lee clashed with The Army of the Potomac commanded by George G. Meade, who just took control a few days prior. The battle is broken down into different generalized areas:

Find out more about the battle here.

From a photography stand point the farms, fields, fences (stone and wood), monuments, big sky, trees and vistas make this area rip with great scenery. That is what this blog post is about, places to get good pictures and hopefully it will inspire you to get out and shoot more.

As I started to put this together, it grew too big for one blog post; actually, it grew into a book. Check it out here. I didn't write this to be a history of the battle or to try and explain troop movements. Like I mentioned before, I am out photographing the battlefield quite a bit. And I get asked a lot of good places to take pictures on the field. After talking to them about photography and the battlefield, it became clear that the best way to put this together would be to use the parks Auto Tour markings. Most people new to the field get their map from the park with the auto tour information on it. Then take a drive around following the auto tour for an initial loop. Then go back and explore more in-depth.

Each of the areas has unique photographic qualities, and we'll cover a few key spots that might help you if you are limited on time and want to get some beautiful shots. And for ease of use, we will follow the driving tour from the park service get your map here…

So we're going to follow the auto tour map and markings to give you some ideas of what kind of photography can be taken in the different areas. With sixteen auto tour stops and at least four other areas to cover, we will start on the First Day field and auto tour stop 1.

This is where the battle got rolling with several key features like the Railroad cut and McPherson barn. The barn is a great spot for sunsets, it is easy to get to and has a good field of view but can be tricky with Route 30 there. But it is totally worth it and can be done. Here are a few of the McPherson Barn.

The Peace Light is one of my favorite spots (I have a lot of them). There is something more about this spot to me, maybe that has to do with the history and not just the battle history. But on July 3, 1938, President Franklin D. Roosevelt dedicated it at the seventy-fifth anniversary of the battle. Below is a video I found that has some footage of the 50th & 75th anniversaries, but at the 2:48 mark, it shows the monument's dedication. I've always loved old images and footage, and this is no exception. We all know what happened during the battle, but there are no pictures of the actual fighting, only the aftermath. The Peace Light Dedication and reunions have footage of the men who fought here, footage of the dedication for us to see, and then stand where it happened. Again, I know what happened at the battle, but this is fascinating to me.

SIDE NOTE - A place to go with usually fewer people is Blocher's Knoll (Barlows Knoll) read more here. It gives you a different perspective on Oak Hill & Ridge and the approach to town from the north.

The Union line ran along Oak Ridge on the afternoon of July 1, 1863. Oak Ridge is a good area for sunsets and a good view of the field. There are a few popular monuments along the ridge, including the 90th PA that looks like a "Granite Tree," which is along Doubleday ave. And probably the most famous dog of the battle is Sallie, the mascot of the 11th PA Infantry.

The Next Auto Tour Stop is on Confederate Ave. We'll pick up there next week. But before we get to stop four, you will pass thru the Seminary.  There is a pretty good museum in Seminary that covers the activities of the first-day battlefield well. And you can go up in the Cupola and see over the fields. Learn more here.  And also, there is a very nice walking path on the Seminary grounds.

We hope you are enjoying this photo tour of the battlefield using the National Parks Auto Tour. If you are please come back next week to see more.

Get a copy of the companion book below, choose your version. 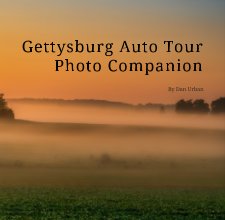 Get the 7x7 version

Get the Ebook version

Join our group on MeWe

Embrace and Just Be Yourself

Can Meditation Give You a Quiet Mind and Change Your Life Forever?